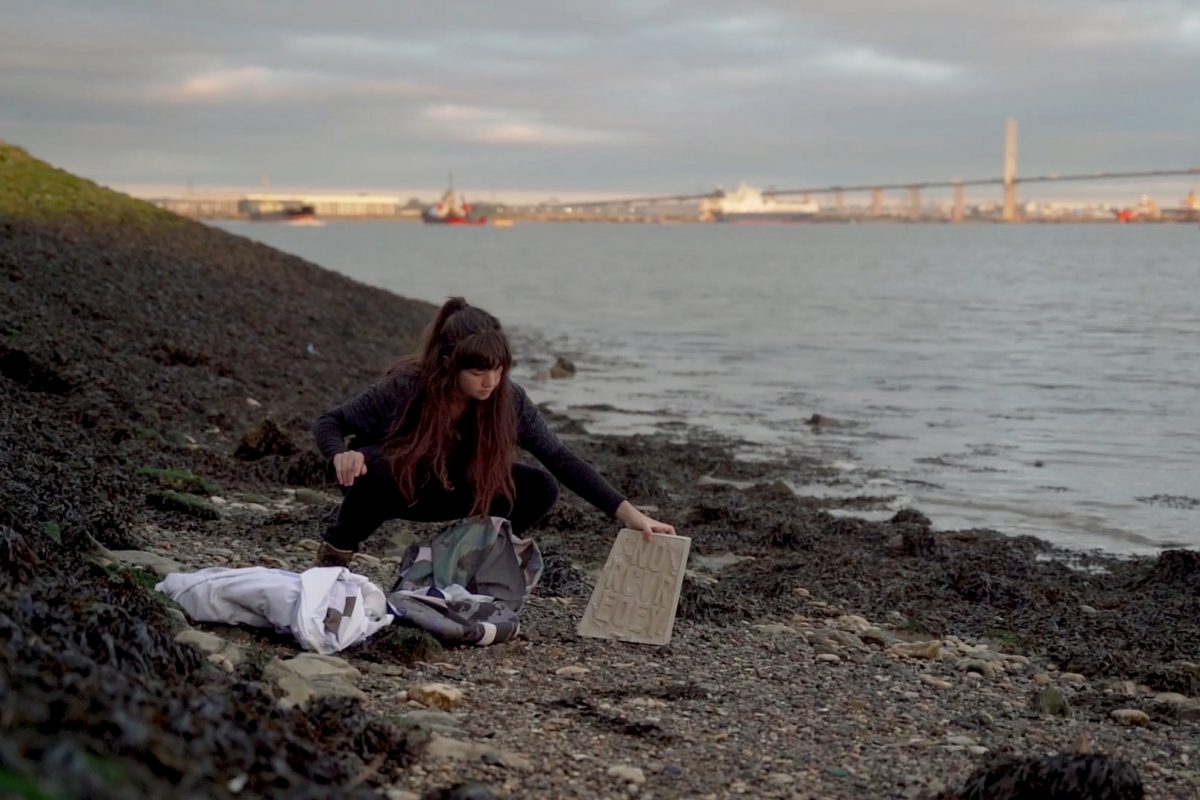 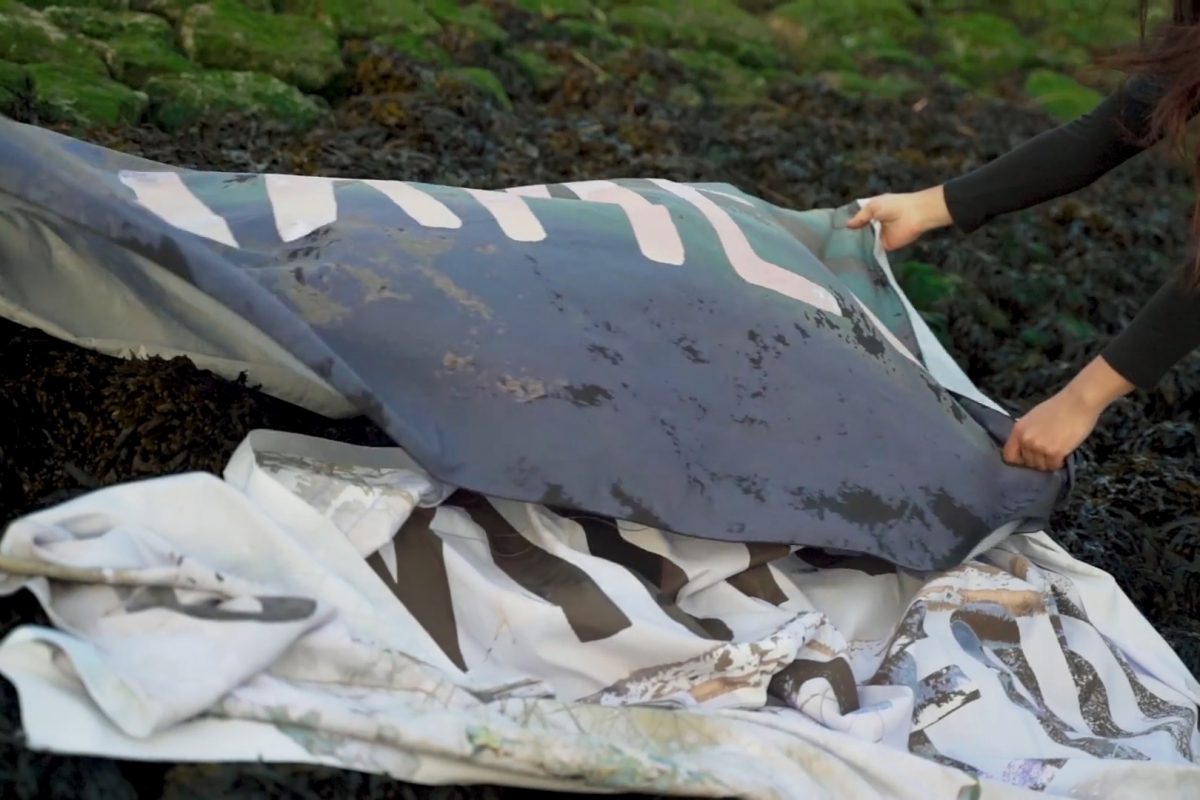 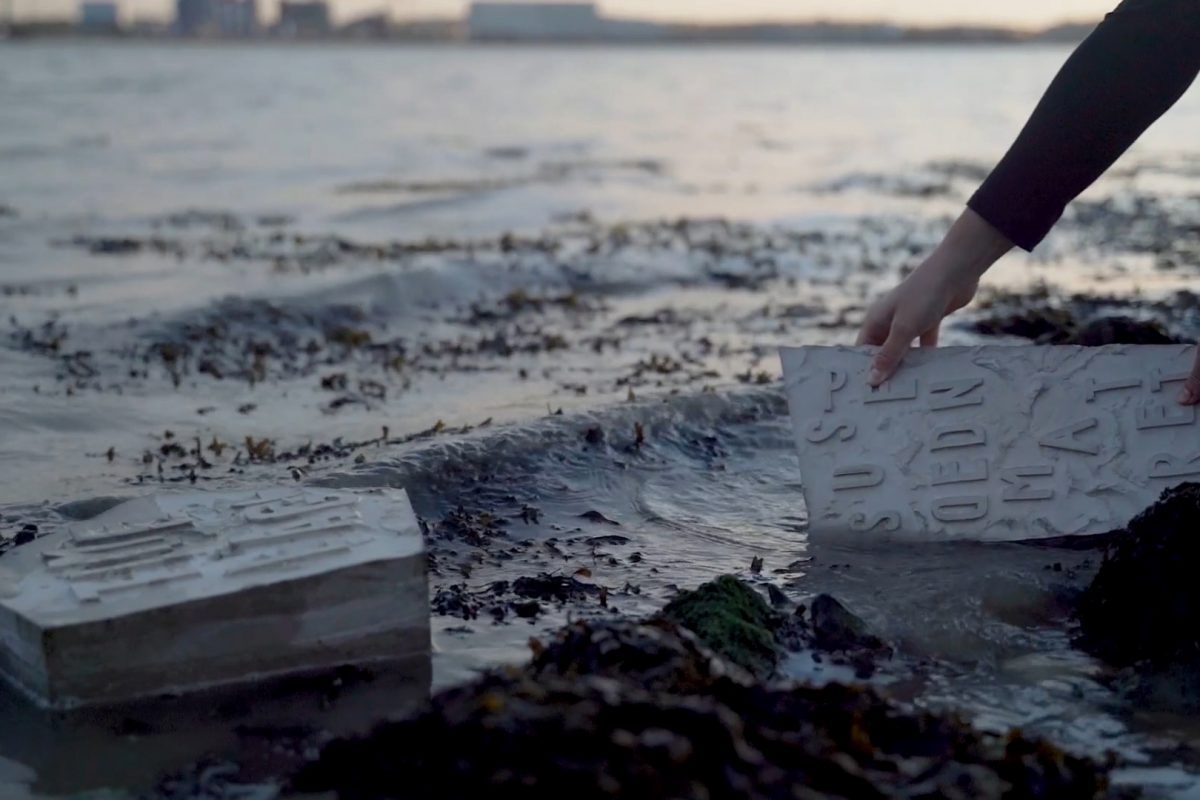 What is Ebbsfleet made of? Stand on this giant chalk slab stretching the length of Southern England. Stand on those cliffs where great chunks of it have been sheared away. Long ago, this place was a white sludge, as microorganism bodies drifted slowly to downwards, turning the sea a milky blue.

When you look at the River, what do you see? Water slices through a silty stretch, where generations have produced the new materials of Ebbsfleet.

Geologists dig a hole; a list of materials is typed: Clay, chalk, sand, flints… but also ‘MADE GROUND’ – brickwork, mortar, cement, metals and aggregate. Textiles, shopping trolleys and… shoes. A lilting poem emerges, a musicality of textures and shapes.

The Land is Time, and Time is the Land; a build-up of thoughts and actions. Lifetimes passed, families grown, stories handed down. Dreams dreamed and lives lived.

Look back on a hundred million years in a handful of dusty white. Get that deep time feeling.

For Deep Thames // Visit Cretaceous, Lydia Brockless started by looking at the materials of Ebbsfleet. What is it made of, what is underneath it? She’s long had an interest in geology and geomorphological processes, and what they can tell us about our experience of time and change. Lydia found that every time a geological core sample is taken for a building project, or a new road – a borehole data sheet is generated; these are functional texts but they read as rich, poetic lists of materials, with descriptions of colour and texture. She also found poetry in the technical terms used in these reports, an example being the phrase ‘Made Ground’ – referring to the layers of human-generated matter which appear frequently in the contents of these boreholes, illustrating perfectly our own contribution to the geological makeup of this area.

Lydia is interested in the layering of human and non-human experience which is contained both in the ground beneath our feet, and of course in those great chunks of exposed chalky cliff which confront us all around the Ebbsfleet area. This series of works considers various aspects of the Ebbsfleet locale:

The sense of elevation, of levels in the landscape given to us by these stark cliffs and rolling hills – where, viewed from below, the ancient chalk touches the sky.

The low, muddy wetness of the Thames, a reminder of the more rapid sense of change in the flowing of the water.

The layers of human industry from the last 200 years, coexisting with geological matter which moves on an altogether incomprehensible timescale.

Taking visual and material clues from a long walk taken around the area early in April, Lydia drew on her interest in the interaction between text and object, and the idea of the ‘Geology of an Image’ to produce four concrete sculptures, two digitally-printed fabric banners and a series of texts, which are documented here in a film produced with the invaluable expertise of filmmaker James Eades. She wanted to present these works in the landscape which inspired them, but document them using film – to layer the text, sounds and movements which activate these visual works. This allows them to exist in that landscape forever and be viewed without the constraints of time or place.

Deep Thames // Visit Cretaceous was shown online as part of Estuary 2021, and was developed through a This Must Be the Place micro-commission, responding to Ebbsfleet Garden City and its communities.